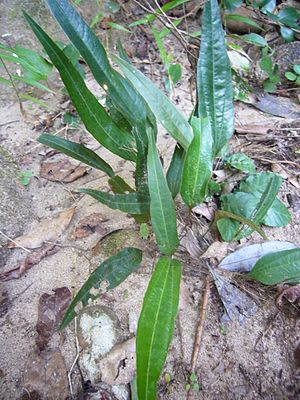 Trichopus zeylanicus is a small herbaceous plant, which is one of only two species of its genus, Trichopus. Formerly it was placed in its own family, Trichopodaceae, but is now included in the Dioscoreaceae family. The herb grows on sandy soil near rivers and streams in shady places in lowland and intermediate altitude forests. It flowers year long and the fruits are thought to be dispersed by water. The unusual flowers are purplish black.

The licence to provide jeevani was granted to Arya Vaidya Pharmacy. A regular supply of the leaves of the plant was required. Scientifiec studies revealed that the medicinal properties of the plant are best manifested in plants growing in natural habitat.[3]