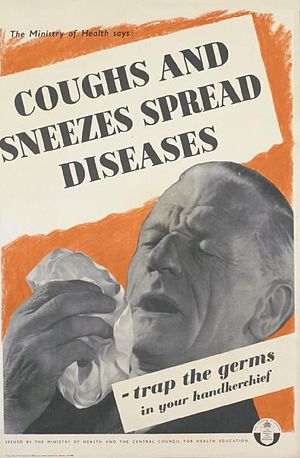 A sneeze, or sternutation, is a semi-autonomous, convulsive expulsion of air from the lungs through the nose and mouth, usually caused by foreign particles irritating the nasal mucosa. A sneeze expels air forcibly from the mouth and nose in an explosive, spasmodic involuntary action resulting chiefly from irritation of the nasal mucous membrane. Sneezing is possibly linked to sudden exposure to bright light, sudden change (fall) in temperature, breeze of cold air, a particularly full stomach, or viral infection, and can lead to the spread of disease.

The function of sneezing is to expel mucus containing foreign particles or irritants and cleanse the nasal cavity. During a sneeze, the soft palate and palatine uvula depress while the back of the tongue elevates to partially close the passage to the mouth so that air ejected from the lungs may be expelled through the nose. Because the closing of the mouth is partial, a considerable amount of this air is usually also expelled from the mouth. The force and extent of the expulsion of the air through the nose varies.

Sneezing cannot occur during sleep due to REM atonia – a bodily state wherein motor neurons are not stimulated and reflex signals are not relayed to the brain. Sufficient external stimulants, however, may cause a person to wake from their sleep for the purpose of sneezing, although any sneezing occurring afterwards would take place with a partially awake status at minimum.

Sneezing typically occurs when foreign particles or sufficient external stimulants pass through the nasal hairs to reach the nasal mucosa. This triggers the release of histamines, which irritate the nerve cells in the nose, resulting in signals being sent to the brain to initiate the sneeze through the trigeminal nerve network. The brain then relates this initial signal, activates the pharyngeal and tracheal muscles and creates a large opening of the nasal and oral cavities, resulting in a powerful release of air and bioparticles. The powerful nature of a sneeze is attributed to its involvement of numerous organs of the upper body – it is a reflexive response involving the face, throat, and chest muscles. Sneezing is also triggered by sinus nerve stimulation caused by nasal congestion and allergies.

The neural regions involved in the sneeze reflex are located in the brainstem along the ventromedial part of the spinal trigeminal nucleus and the adjacent pontine-medullary lateral reticular formation. This region appears to control the epipharyngeal, intrinsic laryngeal and respiratory muscles, and the combined activity of these muscles serve as the basis for the generation of a sneeze.

The sneeze reflex involves contraction of a number of different muscles and muscle groups throughout the body, typically including the eyelids. The common suggestion that it is impossible to sneeze with one's eyes open is, however, inaccurate. Other than irritating foreign particles, allergies or possible illness, another stimulus is sudden exposure to bright light – a condition known as photic sneeze reflex (PSR). Walking out of a dark building into sunshine may trigger PSR, or the ACHOO (autosomal dominant compulsive helio-ophthalmic outbursts of sneezing) syndrome as it's also called. The tendency to sneeze upon exposure to bright light is an autosomal dominant trait and affects 18-35% of the human population.

A rarer trigger, observed in some individuals, is the fullness of the stomach immediately after a large meal. This is known as snatiation and is regarded as a medical disorder passed along genetically as an autosomal dominant trait. It is known for some people to sneeze during the initial phases of sexual arousal. Doctors suspect that the phenomenon might arise from a case of crossed wires in the autonomic nervous system, which regulates a number of functions in the body, including "waking up" the genitals during arousal. The nose, like the genitals, contains erectile tissue.[medical citation needed]. This phenomenon may prepare the vomeronasal organ for increased detection of pheromones.

The longest sneezing spree on record is 978 days. For this and other miscellaneous facts about sneezing, see "11 Surprising Sneezing Facts."

While generally harmless in healthy individuals, sneezes spread disease through the infectious aerosol droplets, commonly ranging from 0.5 to 5 µm. A sneeze can produce 40,000 droplets. To reduce the possibility of thus spreading disease (such as the flu), one holds the forearm or the inside of the elbow in front of one's mouth and nose when sneezing. Using one's hand for that purpose has recently fallen into disuse as it is considered inappropriate, since it promotes spreading germs through human contact (such as handshaking) or by commonly touched objects (most notably doorknobs).

Examples of preventive techniques are: the deep exhalation of the air in the lungs that would otherwise be used in the act of sneezing, holding the breath in while counting to ten or gently pinching the bridge of the nose for several seconds.

Proven methods to reduce sneezing generally advocate reducing interaction with irritants, such as keeping pets out of the house to avoid animal dander; ensuring the timely and continuous removal of dirt and dust particles through proper housekeeping; replacing filters for furnaces and air-handling units; air filtration devices and humidifiers; and staying away from industrial and agricultural zones. Some people, however, find sneezes to be pleasurable and would not want to prevent them.