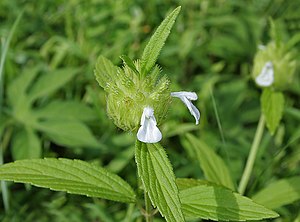 Leucas aspera can be used in Food. Leaves are cooked as vegetable and seeds eaten raw. Seeds also yield an oil which is used for cooking.[2]

Found wild mainly in sunny positions and in a range of soils, especially sandy and well-drained.[6]. Leucas aspera is available through July to September[2].