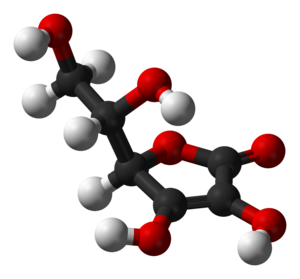 The structure of the antioxidant vitamin ascorbic acid (vitamin C).

An antioxidant is a molecule that inhibits the oxidation of other molecules. Oxidation is a chemical reaction that can produce free radicals, leading to chain reactions that may damage cells. Antioxidants such as thiols or ascorbic acid (vitamin C) terminate these chain reactions. The term "antioxidant" is mainly used for two different groups of substances: industrial chemicals which are added to products to prevent oxidation, and natural chemicals found in foods and body tissue which are said to have beneficial health effects.

To balance the oxidative state, plants and animals maintain complex systems of overlapping antioxidants, such as glutathione and enzymes (e.g., catalase and superoxide dismutase) produced internally or the dietary antioxidants, vitamin A, vitamin C and vitamin E.

Antioxidant dietary supplements do not improve health nor are they effective in preventing diseases[citation needed]. Randomized clinical trials including supplements of beta-carotene, vitamin A and vitamin E singly or in different combinations found no effect on mortality rate and cancer risk, or may even increase cancer risk. Supplementation with selenium or vitamin E does not reduce the risk of cardiovascular disease. Oxidative stress can be considered as either a cause or consequence of some diseases, an area of research stimulating drug development for antioxidant compounds for use as potential therapies.

Industrial antioxidants have diverse uses, such as food and cosmetics preservatives and inhibitors of rubber or gasoline deterioration.

Although certain levels of antioxidant vitamins in the diet are required for good health, there is considerable debate on whether antioxidant-rich foods or supplements have anti-disease activity. Moreover, if they are actually beneficial, it is unknown which antioxidant(s) are needed from the diet and in what amounts beyond typical dietary intake. Some authors dispute the hypothesis that antioxidant vitamins could prevent chronic diseases, while others maintain such a possibility is unproved and misguided from the beginning.

Polyphenols, which often have antioxidant properties in vitro, are not necessarily antioxidants in vivo due to extensive metabolism. In many polyphenols, the catechol group acts as electron acceptor and is therefore responsible for the antioxidant activity. However, this catechol group undergoes extensive metabolism upon uptake in the human body, for example by catechol-O-methyl transferase, and is therefore no longer able to act as electron acceptor. Many polyphenols may have non-antioxidant roles in minute concentrations that affect cell-to-cell signaling, receptor sensitivity, inflammatory enzyme activity or gene regulation.

Although dietary antioxidants have been investigated for potential effects on neurodegenerative diseases such as Alzheimer's disease, Parkinson's disease, and amyotrophic lateral sclerosis, these studies have been inconclusive.

Tirilazad is an antioxidant steroid derivative that inhibits the lipid peroxidation that is believed to play a key role in neuronal death in stroke and head injury. It demonstrated activity in animal models of stroke, but human trials demonstrated no effect on mortality or other outcomes in subarachnoid haemorrhage and worsened results in ischemic stroke.

Similarly, the designed antioxidant NXY-059 exhibited efficacy in animal models, but failed to improve stroke outcomes in a clinical trial. As of November 2014, other antioxidants are being studied as potential neuroprotectants.

Common pharmaceuticals (and supplements) with antioxidant properties may interfere with the efficacy of certain anticancer medication and radiation.

Antioxidants are used as food additives to help guard against food deterioration. Exposure to oxygen and sunlight are the two main factors in the oxidation of food, so food is preserved by keeping in the dark and sealing it in containers or even coating it in wax, as with cucumbers. However, as oxygen is also important for plant respiration, storing plant materials in anaerobic conditions produces unpleasant flavors and unappealing colors. Consequently, packaging of fresh fruits and vegetables contains an ~8% oxygen atmosphere. Antioxidants are an especially important class of preservatives as, unlike bacterial or fungal spoilage, oxidation reactions still occur relatively rapidly in frozen or refrigerated food. These preservatives include natural antioxidants such as ascorbic acid (AA, E300) and tocopherols (E306), as well as synthetic antioxidants such as propyl gallate (PG, E310), tertiary butylhydroquinone (TBHQ), butylated hydroxyanisole (BHA, E320) and butylated hydroxytoluene (BHT, E321).

The most common molecules attacked by oxidation are unsaturated fats; oxidation causes them to turn rancid. Since oxidized lipids are often discolored and usually have unpleasant tastes such as metallic or sulfurous flavors, it is important to avoid oxidation in fat-rich foods. Thus, these foods are rarely preserved by drying; instead, they are preserved by smoking, salting or fermenting. Even less fatty foods such as fruits are sprayed with sulfurous antioxidants prior to air drying. Oxidation is often catalyzed by metals, which is why fats such as butter should never be wrapped in aluminium foil or kept in metal containers. Some fatty foods such as olive oil are partially protected from oxidation by their natural content of antioxidants, but remain sensitive to photooxidation. Antioxidant preservatives are also added to fat based cosmetics such as lipstick and moisturizers to prevent rancidity.

Antioxidants are frequently added to industrial products. A common use is as stabilizers in fuels and lubricants to prevent oxidation, and in gasolines to prevent the polymerization that leads to the formation of engine-fouling residues. In 2007, the worldwide market for industrial antioxidants had a total volume of around 0.88 million tons. This created a revenue of circa 3.7 billion US-dollars (2.4 billion Euros).

They are widely used to prevent the oxidative degradation of polymers such as rubbers, plastics and adhesives that causes a loss of strength and flexibility in these materials. Polymers containing double bonds in their main chains, such as natural rubber and polybutadiene, are especially susceptible to oxidation and ozonolysis. They can be protected by antiozonants. Solid polymer products start to crack on exposed surfaces as the material degrades and the chains break. The mode of cracking varies between oxygen and ozone attack, the former causing a "crazy paving" effect, while ozone attack produces deeper cracks aligned at right angles to the tensile strain in the product. Oxidation and UV degradation are also frequently linked, mainly because UV radiation creates free radicals by bond breakage. The free radicals then react with oxygen to produce peroxy radicals which cause yet further damage, often in a chain reaction. Other polymers susceptible to oxidation include polypropylene and polyethylene. The former is more sensitive owing to the presence of secondary carbon atoms present in every repeat unit. Attack occurs at this point because the free radical formed is more stable than one formed on a primary carbon atom. Oxidation of polyethylene tends to occur at weak links in the chain, such as branch points in low-density polyethylene.