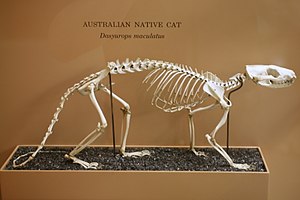 Allometry is the study of the relationship of body size to shape, anatomy, physiology and finally behaviour, first outlined by Otto Snell in 1892, by D'Arcy Thompson in 1917 in On Growth and Form and by Julian Huxley in 1932. Allometry is a well-known study, particularly in statistical shape analysis for its theoretical developments, as well as in biology for practical applications to the differential growth rates of the parts of a living organism's body. One application is in the study of various insect species (e.g., the Hercules Beetle), where a small change in overall body size can lead to an enormous and disproportionate increase in the dimensions of appendages such as legs, antennae, or horns. The relationship between the two measured quantities is often expressed as a power law equation:

or in a logarithmic form:

where a {\displaystyle a} a is the scaling exponent of the law. Methods for estimating this exponent from data can use type-2 regressions, such as major axis regression or reduced major axis regression, as these account for the variation in both variables, contrary to least squares regression, which does not account for error variance in the independent variable (e.g., log body mass). Other methods include measurement-error models and a particular kind of principal component analysis.

Allometry often studies shape differences in terms of ratios of the objects' dimensions. Two objects of different size, but common shape, will have their dimensions in the same ratio. Take, for example, a biological object that grows as it matures. Its size changes with age, but the shapes are similar. Studies of ontogenetic allometry often use lizards or snakes as model organisms both because they lack parental care after birth or hatching and because they exhibit a large range of body sizes between the juvenile and adult stage. Lizards often exhibit allometric changes during their ontogeny.

In addition to studies that focus on growth, allometry also examines shape variation among individuals of a given age (and sex), which is referred to as static allometry. Comparisons of species are used to examine interspecific or evolutionary allometry (see also: Phylogenetic comparative methods).